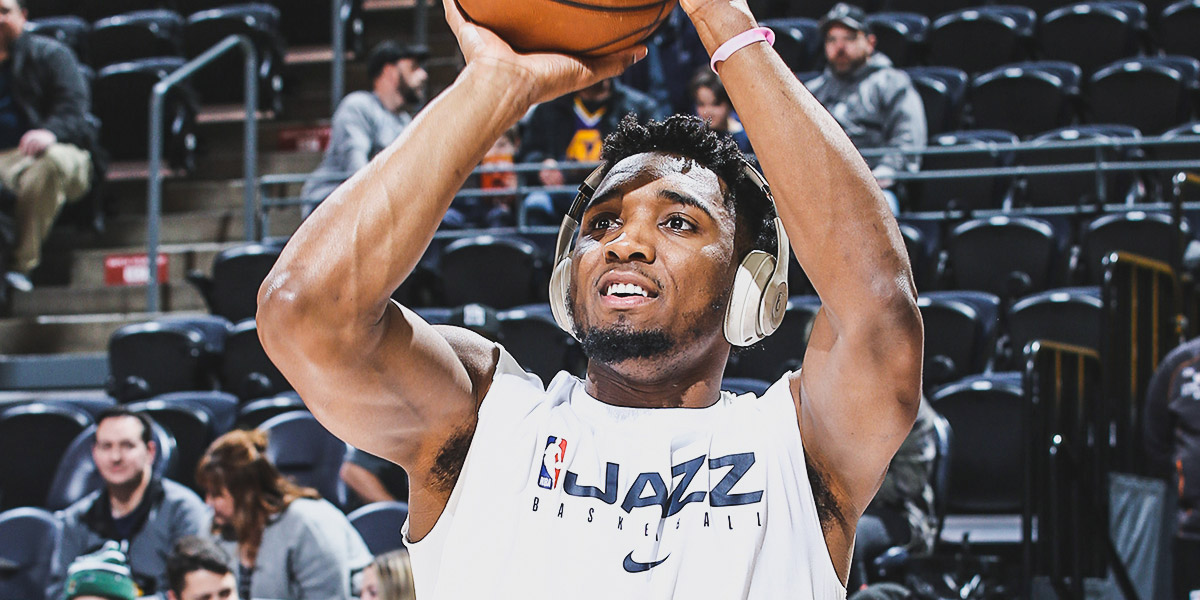 What motivates Donovan Mitchell to succeed? What’s the best advice he’s ever received from another player? And will the former Slam Dunk champion ever try to reclaim his title?
The Utah Jazz guard met with more than 300 teenagers recently to answer their questions.

Q: What motivates you to keep going?
A: “Honestly, I remember growing up watching my mom having to work a lot to make sure me and my sister had what we needed. Just trying to find ways to have a better life. There were times when money was tight and things were tough. My mom somehow found a way. She made a way. Once I realized basketball was something I could making a living with, I was like, ‘I’m going to keep working so my mom doesn’t have to work, my sister doesn’t have to work. There are only 450 of us [NBA players] in the world. That number really stands out to me. I was just like y’all, going to high school and playing basketball and having this dream. I had to make it a reality. So whatever it is you want to do, put your most into that. Don’t give 90 percent.”

Q: How many shots do you take a day?
A: “I have a routine. I couldn’t give you a set number. I would probably do about 10 different finishes at the rim. Finishing Euro-step layups. Goofy-foot layups; right foot, right hand. In college I would shoot NBA 3s for an hour straight. If you can get to a point where you work harder when no one’s watching than when your coaches are watching, that’s what separates you. It’s easier to work when someone is watching. It’s tougher when you’re pushing yourself when nobody is watching. That’s the point you should get to.”

Q: What was your most difficult time in basketball?
A: My freshman year of college. I didn’t think I wanted to play basketball anymore. I played for Rick Pitino. He’s a tough coach and he gets the most of out his players. He pushes you to a point where you can go one of two ways. I remember calling my mom saying you might have to come and get me.

Q: What was your biggest obstacle, mentally or physically?
A: Mentally, it was being uncomfortable. A lot of people like to be comfortable. I do, too. I like to be loved on social media. But are you comfortable not being the best? I went to high school at Brewster Academy. You know Devonte’ Graham (now with the Charlotte Hornets)? Devonte’ was the best player in the entire Northeast. I wanted to play with him. Are you comfortable pushing yourself, being around people who are better than you? A lot of people just want to be top dog. But what do you really want? Do you want to be told you’re the best or do you want to find ways to continue growing. I overcame it. Now I prefer to be told I’m not good. Some of y’all may have tweeted I took too many shots during my rookie year. Some of y’all may still tweet it. I would type my name and ‘trash’ or ‘sucks’ on Twitter. I would look at it. That’s what motivated me. I fell in love with being told how bad I was. I feel in love with being uncomfortable. My coach calls it being full. Are you hungry or are you full? I take pride in being hungry.”

Q: Will you compete in the Dunk Contest this year?
A: No. I’m not. I’m tired! I’ve been playing since June, July. I haven’t stopped. But I might do it again. I’m thinking about it.

Q: Do you ever get nervous before a game?
A: The bigger the game, the more I break it down into just Xs and Os. Game 6 against OKC my rookie year, that was a big game for the team. That was a big game for me. I was playing against Russell Westbrook, a guy I grew up watching. When we lost Game 5, I told a fan we weren’t coming back there. That got put on House of Highlights. Now we had to win the game. So, for me, I just broke it down. This is the same game I’ve played since I was 9. If you break it down step by step — as opposed to thinking about how 20,000 people are in the arena, this is Game 6, a million people are watching — if you break it down, it’s easier.

Q: What’s the best advice you’ve received during your career?
A: One that stands out to me is what Russell Westbrook told me my rookie year. I can’t tell you everything he said. They weren’t words I can use right now. But he said that people will want to see you succeed until you fail. That really stuck with me. Everyone wants to cheer for you when you’re doing well. I think of Lamar Jackson (the Baltimore Ravens quarterback), who is a friend of mine. He had one bad game now people talk like he’s the worst quarterback in history. They can’t wait to tear you down. It’s human nature. I don’t know why we’re that way, but we are. So it’s up to you to decide: Am I going to let them pick at my flaws and dictate who I am, or am I going to be OK being me?

Q: How can I improve my free throws?
A: “Not gonna lie, that’s an important question. There are a lot of people who think about 25 different things and miss the free throw. My mind is everywhere all the time. I used to get to the free throw line and think about everyone looking at me. What if I miss this? You know those voices in your head. Now I look at the front of the rim. I visualize myself the last time I made a free throw. Right now, it was at home last week against Charlotte. I take myself back to that place where I had success instead of focusing on the pressure.”